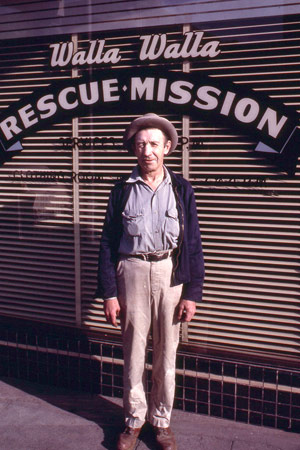 In 1946, a local businessman called Gus Anderson had a burden for the many homeless and outcast men roaming lower Main Street in Walla Walla, Wash. World War II had ended and some were finding it hard to adjust to peacetime again. Other men had previously held down good jobs and had families, but because of their addiction to alcohol they had lost everything—even their self-respect. They were dirty and hungry, and society wanted nothing to do with them. Anderson saw they needed food, clothing, and shelter; but they also needed to hear the gospel of God’s love. He believed something had to be done, and his concern led him to develop a program to meet these needs in Walla Walla.

For a while the ministry was known as "The Church in Overalls." They served soup, sandwiches and coffee; and presented the gospel to those who came each evening. Although organizations may not have had written mission statements in 1946, the Mission used two verses from the  Bible to explain their calling—James 2:15-16 reads:

“If a brother or sister be naked and destitute of daily food, and one of you says to them, ‘Depart in peace, be warmed and filled,’ but you do not give them the things which are needed for the body, what does it profit?”

The mission continued to grow and its location was moved to 10 N 4th Street where rooms in the vacant State Hotel were leased. In 1947, it was organized as the "Union Gospel Mission." It kept on serving an evening meal followed by a chapel service featuring messages from the Bible. With this new facility came the ability to provide meals for 25 men and lodging for 17. 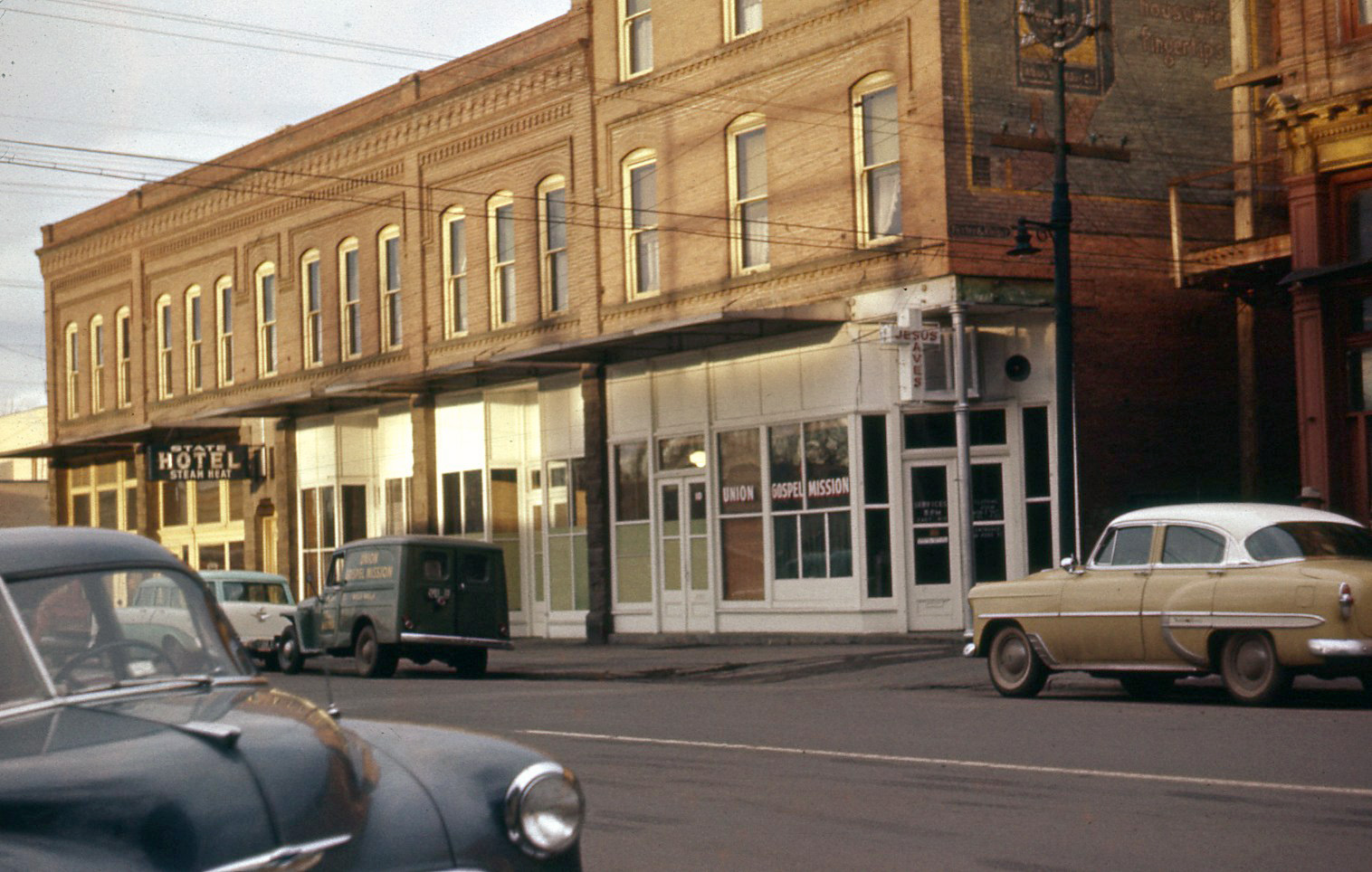 Bernie Kluehe became the new superintendent in 1957. Right away he painted the front of the mission white to brighten it up and give it a cleaner look. Kluehe saw need of more room and for the mission to own its own property, so in 1958 they bought and moved to the vacant New York Store on Main Street. This new location allowed them to shelter 30 men in bunk beds and more on pads if needed. Generally, men were allowed to stay up to three days, but if a man was out looking for work and trying to free himself from drinking he could stay longer.

Kluehe was always aware of conditions that could affect the men staying in the mission in a negative way, and noticed open prostitution in the vicinity of the building. He learned the city had a tolerance policy toward the brothels that amounted to an unwritten understanding that they could operate if there was no trouble. He also learned of an article in the Look magazine published in 1952, about a survey by the American Social Hygiene Association on vice in American cities. A map in the article pinpointed the “hot spot” cities, indicating open tolerance of prostitution. Walla Walla was one of three cities listed in the state of Washington (three being the most cities of any state in the country).

Five years after the article had been published nothing had been done to correct the situation. However, through the efforts of the mission’s administration and other compounding circumstances, the three houses of prostitution were closed by the end of 1960.

Around that time, the mission began serving a noon meal. The meal was open to anyone, and a short devotional talk was given by one of the local businessmen before the food was served. In 1963, it became the "Walla Walla Rescue Mission" to avoid any connection with the growing anti-union sentiment in the area. Hundreds of men were walking the streets of Walla Walla because of a late cannery season start and men normally housed in cannery dormitories had no place to go or food to eat. For two-and-a-half weeks, the mission served three meals a day and housed around 55 men each evening. Following this crisis, the noon and evening meals continued.

In 1971 the mission had to sell its building to the city due to an urban renewal project taking place on Main Street. That is when it moved to its present location, 202 W. Birch, in a former church building. The move again provided room for growth. While sleeping facilities remained about the same, the dinning facilities were much larger allowing more people to be served at each meal. Then around 1975, the mission was renamed again as the "Walla Walla Rescue Mission Christian Aid Center," but was more commonly referred as “The Christian Aid Center.” The mission tried to purchase property around the main building without success. So in 1983, ground was broken for the Family Quarters—a building including four apartments and a laundry room. 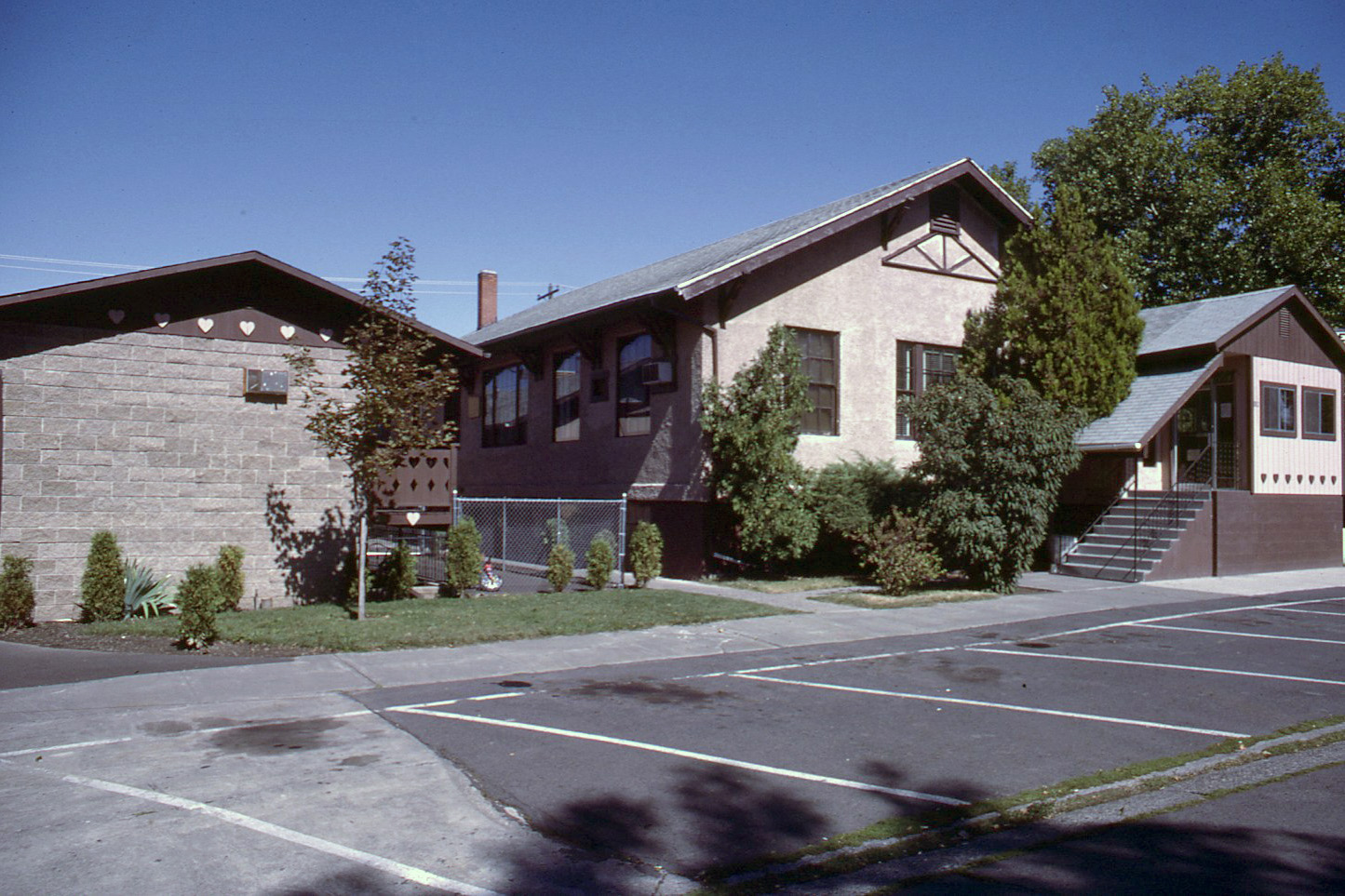 The Mission began to see a need to not only serve homeless men, but also homeless women and families. Across the nation homelessness was growing at an alarming rate. In 1989, five new pieces of property were purchased, four for housing and one for a school. The properties included a house to be used as a shelter for women, a large house with four apartments for families, a small house that became a day care center, another house for families that became a staff house, and a large building on S. 3rd Street to be used as a school.

The property purchased for the school was developed as a resident school for troubled youths, and operated for two years as Discovery High School. In 1995, it was changed to a special needs school for children in grades 3-5. And two years later, it became independent of the mission to operate on its own.

In 1997, community volunteers started preparing and serving the dinners. Breakfast and dinner were offered to anyone that was hungry in the community, and lunch was only served to those who spent the night at the center.

Today, the center still provides meals, clothing, and housing for homeless men, and women and their children. Restoration programs for men and women, and many life-skills classes are offered to bring change and hope into their lives. On any given day, there is an average of 20 volunteers on campus. They cook, serve food, clean, organize donations, mow lawns, teach classes, conduct Bible studies, take care of children, cut hair, and pick up donated food from local businesses.